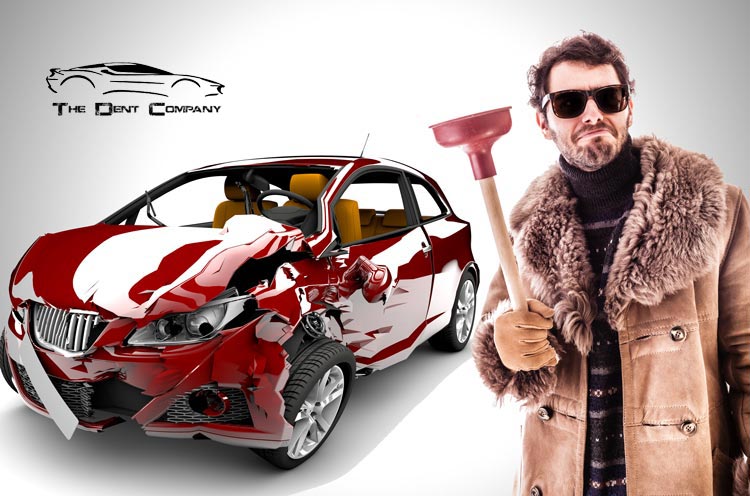 Can you really fix car dents by yourself using one of the many DIY dent fix methods floating around?  Should you? We are in an age where information is readily available and fixes to almost anything can be found on the internet.  While it may look simple and make perfect sense, it doesn’t always mean it will work.  Attempting a fix on your own can get real ugly, real quick.

Speaking of trying to fix a dent by yourself, this brings up our list of “Things to avoid if you can.”  Yes, that list is long but three do stick out and not necessarily in any order.

We know a thing or two about fixing car dents.  In our experience, it is never a good idea to attempt a dent fix by yourself especially if you have insurance.  We frequently repair vehicles where a DIY dent fix was attempted by the owner.  YouTube makes it look so easy, right? At the end of the day, it is almost always more cost-effective if the vehicle is brought to us in the first place.  We will restore it back to its previous condition and its value will be retained.  After all, here at The Dent Company (TDC), we are the dent repair experts!

Remember, the key to a successful dent repair or fix is restoring the vehicle back to the condition it was once in without damaging the paint in the process.

Remember, the key to a successful dent repair or fix is restoring the vehicle back to the condition it was once in without damaging the paint in the process.  Never attempt to fix car dents that have a crease in the metal. The risk of damaging the paint is VERY high. Doing so will lower the vehicle’s value and leave you with “That” mark.  You know, the one spot only you see but you see it every time you look at your vehicle.  In our industry, we call that a “Friendly” dent because it wasn’t repaired correctly and “Waves” at you every time you look at it.

Before we begin, we just need to make this small public service announcement:

Disclaimer: We do not endorse nor recommend any of the following methods to fix a dent in your vehicle.  These methods can cause bodily harm and/or really make a mess out of something.

Fix Car Dents With A Plunger

The Claim: Use the suction from a plunger to pull the dent out

The logic seems sound, right?  Just place a plunger over a car dent, push and then pull that dent right out.  In theory, it should work and may work on larger, shallow dents if done right.  What usually happens, is that the dent gets bigger as the plunger is pushed to get the suction needed to pull the dent out.  It is also possible that the paint can crack as the metal is flexed.  If you insist on trying this method, use a sink plunger vs. one designed for the toilet.  They are rounder and more shallow.

Use Dry Ice To Remove a Dent

The Claim: A dent will pop back into place by rapidly cooling the metal with dry ice.

There are several methods that describe using dry ice to fix a car dent.  A piece of dry ice is set directly on the dent or the metal is first heated from the sun or a hair dryer. When the dry ice is applied, the metal is quickly cooled thus constricting and the dent will “Pop” back into place.  Well, there are two problems we see right off the bat.  First, dry ice is really cold.  Like, as in -109° cold. Any contact with skin can cause instant frostbite similar to a “Burn.”  It is also so cold that it can ruin your vehicle’s finish, especially if it is first heated.   Secondly, the metal used in car bodies became thinner in the 80’s due to weight and safety.  The new metal does not respond to dry ice as well as the earlier body metal did to fix dents.  If it does work, your best bet is only do it on larger shallow dents.  For example, your car is accidentally hit by a random basketball.

Before attempting to fix car dents by yourself, see if there is a free option. If the dents in your vehicle are from hail damage and you have insurance, you are in luck.

Use A Hair Dryer To Fix a Dent

The Claim: When the metal is heated, it makes it easier to push out the dent

Using the hair dryer method to fix car dents, we run into the same problem we did with the dry ice.  Modern day vehicles are designed to withstand a varying range of temperatures.  A regular blow dryer can only get up to 131° or a typical Tuesday during an Arizona.  Before you get any ideas about using a heat gun, just don’t.  That is a sure way of causing further damage to your paint and finish.  Now, sometimes heat can be used to fix large, shallow dents but only after regular dent repair has been used, first.

Use A Hot Glue Gun To Pull The Dent Out

The Claim: Glue on dowels applied to the dent will allow you to pull it out

Using a hot glue gun to fix car dents is a method paintless dent repair technicians actually use.  With the right equipment and in the right hands, a dent can be successfully fixed…well almost.  As soon as the dent is pulled, the metal will usually try to return to the dented state once you release it.  You may be able to get it close but the dent will almost always remain. This is, of course, if everything goes well.  Here is how the pros do it:

If you are reading this, you probably have already seen the consumer products on the market geared toward dent repair.  Amazon has many products that promise to do what a professionally trained dent repair technician can do.  The reviews are very mixed and your results may vary.  Our technicians invest $1000’s and 10’s of $1000’s in their dent repair tools and for good reason.  They work with them daily and do the job intended.  For $20, the consumer model may be worth a shot.  Just read the reviews first and don’t say we didn’t warn you.

Before attempting to fix car dents by yourself, see if there is a free option. If the dents in your vehicle are from hail damage and you have insurance, you are in luck.  Under a full-coverage insurance policy, getting hail dents fixed is covered.  It is important to note that a deductible will be required if your vehicle is repaired by a traditional body shop.  Fortunately, we are The Auto Hail Repair Experts and will waive that deductible for you.  You pay nothing.  Even better, an auto hail repair claim will not raise your rates as it is considered a no fault of your own aka “Act of God” claim.

Need some dents fixed on your vehicle?  Give us a call!  (866) 685-4245 or book an appointment directly on our Contact Page.  We have appointment times available and our estimates are always free.

Over 30 years of paintless dent repair experience! We have repaired all kinds of vehicle dents and specialize in auto hail repair.

Got Hail? Call Us!